Will sectarianism destroy Iraq? Part 1: the counterattack by Iraqi youth (I want to thank my Iraqi colleague, Dr. Asmaa Abed, for providing the images in this post and sharing with me her extensive knowledge of efforts to counter sectarian ism in Iraq)

Will sectarianism cause Iraq's political system to collapse and perhaps even lead to the country's fragmentation ? Recent violence in Iraq underscores the increase in political instability.  The creation of a so-called "Islamic State of Iraq and the Sham" reflects the impact of the Syrian civil war on Iraq's "Sunni Arab Triangle."  Young Shi'i fighters traveling to Syria to protect Shi'i shrines from radical Sunni extremists demonstrates the fear many Iraqi Shi'a have of extremist Sunni elements coming to power in Iraq's neighbor.  Recently, over 500 hardened terrorists escaped from Abu Ghrayb prison in a well coordinated attack, posing serious questions about the effectiveness of Iraq's security forces.

These events are disturbing, especially when combined with less visible manifestations of sectarianism, such as the fear of Mosul residents to wear their traditional ethnic garb in public for fear of attracting a violent attack (see Niqash,, July 25, 2013).  Sunni Arab perceptions that Iran and the Maliki government are trying to ethnically cleanse al-Diyala Province through which runs Iraq's most important highway to Iran add more oil to sectarian flames

While these examples of sectarianism identities attract the Western media's reporting, little attention
has been paid to efforts to combat this social disease.  Recently, during a discussion of the problems facing Iraq, my State Department colleague, Charles Wise, who has spent considerable time in Iraq training the post-2003 judiciary, opined that, despite all the violence, "the embers of democracy in Iraq are still burning."  I could not have expressed my own thoughts any better.  Charles was right to point out that, violence notwithstanding, Iraqis are a tough lot and still pressing ahead with efforts to create a more tolerant, pluralist and ultimately democratic society.

There are at least three areas where Iraqis are fighting against sectarianism and the authoritarian rule that lurks right behind it.   First, there is an active campaign, largely driven by youth, to raise public awareness about the political and social destructiveness of Iraqis subscribing to sectarian identities.  Secondly, there are efforts in the national parliament and the Kurdish Regional parliament to thwart sectarianism as well.  In this post, I focus on the efforts of youth.  In a forthcoming post, I will talk about efforts of the respective parliaments to reign in the activities of Iraq's sectarian elites, both Arab and Kurdish.

In the image above, we find a number of Iraqi youth standing in Firdaws (Firdos) Square in Baghdad holding signs identifying their respective confession or ethnicity which say, "I am a Sunni/Shi'i/ Christian/Yazidi/Sabean/ student and I am against sectarianism."  Another sign states, "Our life depends on our unity."

To appear in such a photograph, which presents a direct challenge to sectarian militias and crime syndicates, is very dangerous.  It demonstrates the sentiment of a very large segment of Iraqi youth, especially those who are educated. This accords with the findings of my own research with Arab and Kurdish youth between the ages of 12 and 30 who see sectarianism as destructive of their ability to have a career, family and to live in a politically stable society. 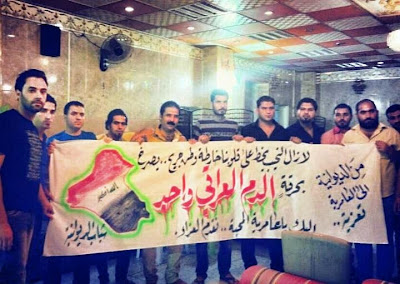 The above sign is one that expresses the concerns of Shi'i youth in the southern city of al-Diwaniya for the death of Sunni youth who were killed by a suicide bomber while playing pool  in a pool hall in the Sunni district of al-Amiriya in Baghdad this past April 18th.  It states that the youth of al-Diwaniyta "send their condolences to the beloved district of al-Amiriya."  Their message is summed up in the main statement across their banner, "Iraqi blood is all the same" (al-damm al-'Iraqi wahidun).  Once again, this photograph demonstrates significant courage because it exposed these youth to sectarian militias in the south, many supported by Iran, such as the League of the Righteous People (Asa'ib Ahl al-Haqq).

Obviously, the anti-sectarian activity by Iraq's youth rerpesents an important statement by Iraq's  "generation in waiting.".  A wide variety of other sectarian posters likewise demonstrate the thinking of large numbers of Iraqi youth. 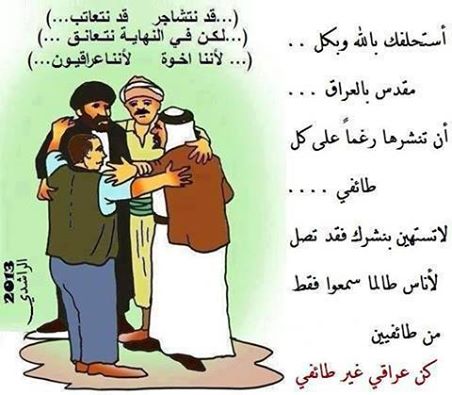 This poster celebrates Iraq's ethnic and confessional solidarity, showing a Shi'i cleric, a Sunni tribal shaykh, a Kurdish man and what is probably an urban middle class man.  The poem to the right enjoins Iraqis:
"I ask you in the name of everything
that is sacred to Iraq
to share it among each other despite the efforts of the sectarians.
Don't neglect to share that which is holy to Iraq because it may reach people who only have heard the voices of the sectarians.
Let every Iraqi be non-sectarian." 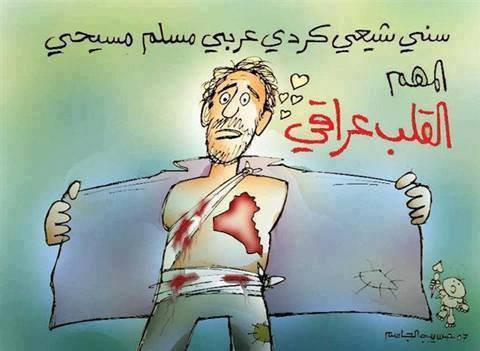 This poster proclaims: "Sunni, Shi'i, Kurdi, Arabi, Muslim, Christian, what's the most important is their heart is Iraqi." 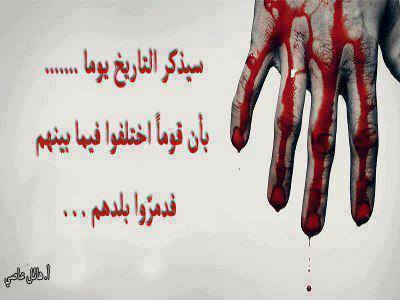 "One day history will note...
That a people who disagreed about what they shared together...
Destroyed their country..." 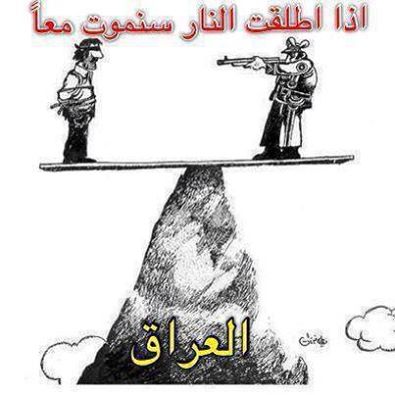 This caricature, which shows 2 men standing on a pyramid with the word, "Iraq," at the bottom, states, "If you open fire, we will both die together." 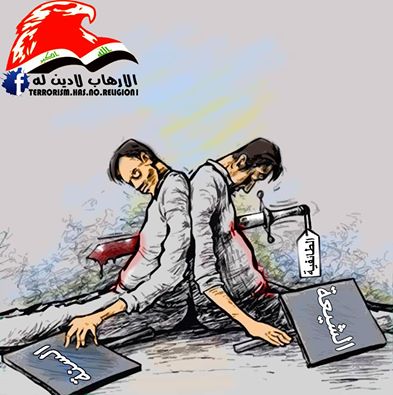 Another popular sign, shows two men pierced with a sword.  Signs next to them identify them respectively as Sunni and Shi'i.  The Arabic and English sign in the upper right hand corner, in reads" "Terrorism has no religion." This sign, drawn from an older government campaign called, "Terrorism has no religion!," shows that, with government leadership - sadly lacking under the current administration of Prime Minister Nuri al-Maliki and Masoud Barzani, president of the Kurdish Regional Government (KRG) in Arbil - Iraqis could benefit from strong cues from the state not to be taken in by sectarianism as well as use its huge powers of publicity to educate the Iraqi population s to the destructive nature of sectarian identities.

As noted to me by my colleague, Iraqi scholar, Dr. Asmaa Abed, in the effort to combat sectarianism, a number of other images have become very popular in Iraq, especially those that draw upon the wisdom of philosophers and clerics who have warned of the dangers of those who manipulate religion for personal and socially destructive ends. 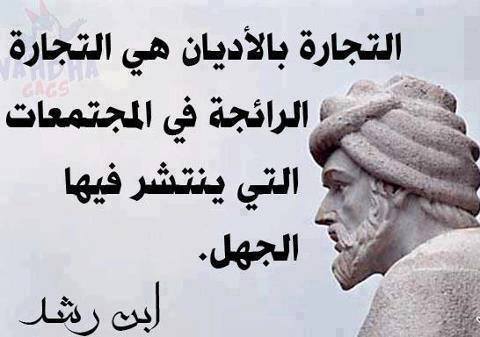 The posters that are the most popular are those that emphasize sayings of important philosophers and clerics that promote tolerance and ecumenical approaches to religion.  Ibn Rushd (Averroes) noted that, "The trade in religions thrives in societies in which ignorance is widespread."

The above saying comes from  Shaykh al-Hasan al-Basri, who was born in 642 CE of Persian parents.  He warns believers: "Beware of the ignorant worshiper and the immoral scholar, who both promote dissension and civil strife among those they seduce" 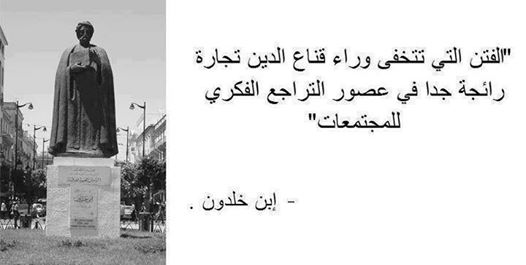 No effort to combat sectarianism would be complete without reference to the wisdom of the great Arab sociologist, Ibn Khaldun.  Here he conserves that, "Sedition that hides behind the mask of religion is very popular in societies that are in an era of decline."

There is much more that could be added about the effort, particularly among Iraqi youth, to fight against the spread by sectarian entrepreneurs of socially destructive ideas that seek to set Iraqis confessional sect and ethnic groups one against the other.

As Dr. Abed also noted, Iraqi youth and civil society activists generally have used social media, including Face Book, to mount a campaign to end the law that gives all parliamentarians a pension of $80,000 per month for life once they end their parliamentary membership.  In a society where poverty is still widespread, many Iraqis consider this benefit that the national parliament voted to itself to be  obscene.

Recently, public pressure to change the law has mounted.  Ammar al-Hakim, the head of the Supreme Iraqi Islamic Coubncil has now come out and indicated that members of his party will no longer accept this right to a perpetual pension.  Whether this pledge will hold remains to be seen.  Nevertheless , what the activities of Iraqi democrats show is that indeed, '"the embers of democracy in Iraq are still burning."
Posted by Eric Davis at 9:37 PM No comments:

Guest contributor, Dr. Alaya Alani, is is Professor of Contemporary History at Manouba University in Tunisia.  This interview below was conducted by La Presse on July 22, 2013.

Guest contributor, Dr. Alaya Allani, is Professor of Contemporary History at Manouba University in Tunisia. His article, "An Analysis of the Decline of Muslim Brotherhood Rule in Egypt" appeared in the Tunisian "al-Sabah News," on July 1, 2013.

Posted by Eric Davis at 9:19 PM No comments: